Clovis Man said:
Is this thing on? <TAP TAP>

The last bike I had, though, was a Yamaha RZ-350. Now that little bike would seriously haul. I had it ported and bored and a bunch other stuff done, it could have been a road race bike if a racer had owned it.

A few weeks ago, I was looking at the 300 cc bikes, thinking they would fit my need just fine, but in recalling the RZ-350 and the amount of power it had, I decided to look some more. The FZ-6R came into focus. Seems like it weighs about 40 pounds more than my RZ did, and has a little less horsepower. An obvious choice. I'm thinking about buying a bike next spring.

Until then, I guess I'll lurk around here and see what I can pick up. Thanks for listening.
Click to expand...

RZ was a 2 stroke... huge difference! LOL
The FZ6R is about everything but what a RZ was. Don't get me wrong, it as enough power to have fun and get around but won't get your panties all wet! LOL FZ09 is more HP/weight ratio you would have on a RD350 0-80 MPH.
[SIGPIC][/SIGPIC]
:canada: Martin

Life is all about attitude. Be hard on yourself, easy on others.

Just Picked up a 2009 FZ6R with 10k miles on it. So far I've ridden it for about 50 miles and I love it. Ive previously owned a 2002 CBR 600rr, an04 R6, and a 2000 Buell Blast, in that order. The FZ6R isn't a cbr or r6 but its a major step up from the Buell Blast and I couldn't be happier. I got the FZ with a 2 brothers exhaust, fender eliminator and flush mount front turn signals, and brand new tires. I plan on changing a few things here and there, but so far I am very pleased with the riding experience. I would eventually like to lower it a bit, as well as plastidip the ugly stock yellow, but first up is changing the stock spark plugs, as well as putting in a K&N air filter to help her breathe a bit. I just found these forums a few days ago and the plethora of info and how to's definitely helped me make the decision to get the bike, awesome community.

Premium Member
Welcome to the forum from a fellow '09 owner, though mine's the faster blue color. I bought mine brand new in 2011 with just 5 miles the techs put on it before delivering it to me and just crossed 20,000 miles after 6 years (though I beat 12,000 miles on it the first year). If you're going to plastidip, check out MistahT's threads. He's the King of Plastidip here. As for spark plugs, I'm not sure if you'll gain much beyond the stock NGK CR9Es besides longevity. Even though I replace mine every 8000 miles since they're cheap and a pain to get to, they've always been in great shape at replacement (95-98% electrode remaining with a light coat of soot).
— John

Hi I'm Jamil & I'm from Connecticut. New to riding. Have always wanted to but many things got in the way. Now can finally enjoy the freedom!

Took the MSF in April & spent about a month looking before I came across my eventual bike...a 2013 FZ6R with just over 300 miles on it! Worked the guy down from 6200 to 4800. Absolutely Love riding!!! Done a few mods to it already. Trying to find a slip on exhaust so I don't have to spend 1k on a full system. If anyone knows of any that will fit please let me know. Haven't had any luck & only option I see is to have it welded to fit.

Hey everyone. New rider here. I picked up a 2011 FZ6R about a month ago and have been working on getting it road worthy. I never thought I'd be into motorcycles or wrenching but a new world has been opened up for me recently. Looking forward to taking the MSF, getting my license, and getting on the road.

Hey everyone, glad to be here.

I've decided to buy a FZ6R and am now trying to decide what year is best. Eager to get riding....
J

found this forum while researching FZ6R stuff. My name is Mark and I live on the Outer Banks of North Carolina. I've owned my 2009 FZ6R for 3 years now! Cheers!

hi, i'm daniel. bought a '15 fz6r to commute and zip around the flint hills of kansas. the fz6r is my second bike, getting back into riding after 6 years (first was a little old carbed ninja 250 that was serious fun to thrash around, but felt too light for prairie crosswinds & had to be spooled up and shifted like three times just to get through a turning lane intersection). so far i love the fz6r's riding position & predictable power / torque distribution. i also enjoy the wrenching, tinkering & maintenance that goes along with motorcycles in general.
O

I’ve been dreaming of owning my own bike for 4 years until I finally took the plunge yesterday and bought my very own 2009 Yamaha Fz6r. She is s thing of beauty, after a couple attempts of looking around Craigslists and meeting some sketchy *** people with their bikes, I took my interest elsewhere and bought one through a dealership used for a really good price! I’m a proud conservative living in Southern California working as an Occupational Therapist, specializing in rehabilitation for brain injuries. I’m basically taking care of people that have gotten into motorcycle accidents and lived through them but are non-ambgulatry for he rest of their lives. Some of them end up be able to walk again but majority of them can never ride. I learned a lot from their stories but seeing what could happen doesn’t stop me from riding. The passion resides deep inside and will carry on until I can no longer ride. I bought the bike and hope I can stack 80k more into it until I move into the fz-09.
N

Hi all. I'm Steven. I bought this FZ6R from my dad to replace my '07 YZF600R. I mainly joined here for the helpful info on comfort mods I want to make - seat, windscreen, hand guards, and sprocket ratio.
K

Welcome to the forums. Have any questions just ask, these folks are a great bunch. If only they'd consolidate the many many sections into less, it can be difficult to navigate sometimes.
C

Hello!
I'm Carlos, I just purchased my first bike 09 fz6r. I'm new to all of this. I do have a question. I need a windscreen, my bike does not have one. Only has the headlight and no "fairings"? What would I need,to be able to have a windshield? Thank you in advance!

Sent from my SM-G950U using Tapatalk 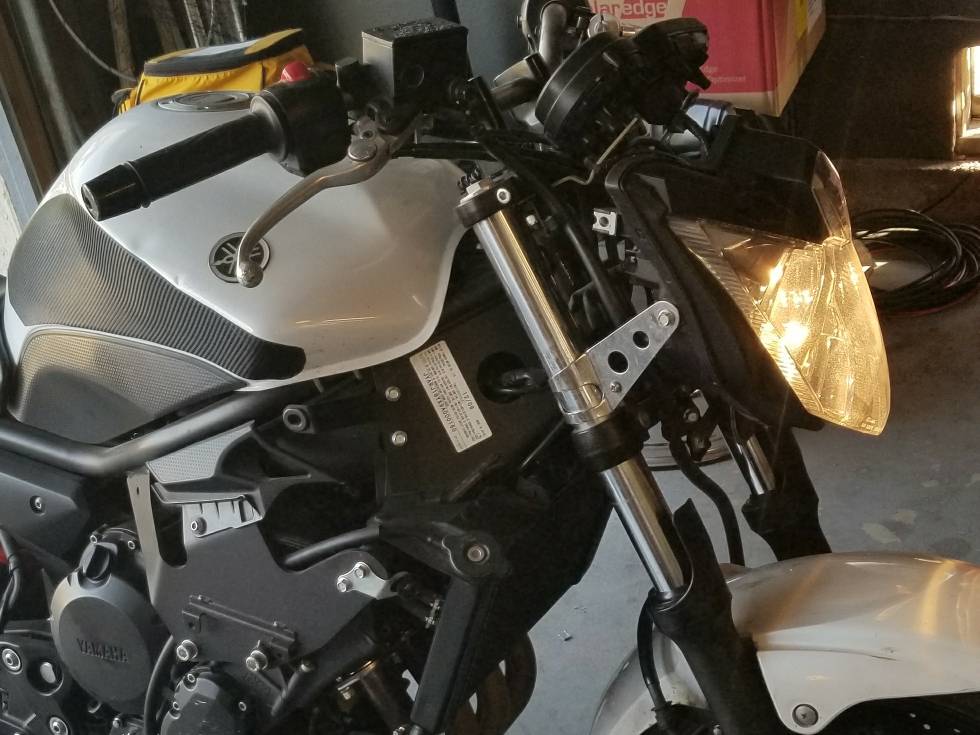 Mark here from The Niagara Region in Ontario Canada.

Not new to riding but with our Licensing process and insurance the FZ6R just made sense as I had to start from scratch again on my licensing.

I was never a big sports bike guy, but this bike beats the hell out of any of the cruisers in the same insurance categories, and the setup I got was a great deal with a full GIVI setup.

I was on the fence between this and the Kawi Versys but I quickly found that I wanted a Yamaha after doing some research.

So here I am, and so far I am loving every minute on this bike!
F

Hailing from the foggy and wet East Coast of Canada, I actually drive a motorcycle in Newfoundland... Sometimes.

Actually, I ride a lot in spite of our crappy weather and just replaced my poor old GS500F (little old lady driver wrote her off) with a new (to me) '11 FZ6R in Copperhead livery! Can't wait to get her out and get used to a 4 cylinder!

Getting back into road riding again after 20 years and bought my new (used) 2012 baby 3 weeks ago. I put 1k miles on her already riding twisty mountain roads around the Columbia River Gorge and Mount Hood area where i live. Looking to do some mods - already did the windshield - so am looking forward to picking the brains of the experienced guys as i fumble my way through the tweaks.

Getting back into road riding again after 20 years and bought my new (used) 2012 baby 3 weeks ago. I put 1k miles on her already riding twisty mountain roads around the Columbia River Gorge and Mount Hood area where i live. Looking to do some mods - already did the windshield - so am looking forward to picking the brains of the experienced guys as i fumble my way through the tweaks.
Click to expand...

Welcome to the club. I'm originally from Spokane, so I know that area fairly well. Back in my flight training days, I did my 250nm solo cross-country from Spokane to Hillsboro so I've seen it from both the road and the sky. I definitely miss my mountains and twisties.

There are a lot more mods then when I first bought my bike new in 2011. It's my first and only bike, though I've ridden lots of others, and it's lived up to what I was originally looking for; a good commuter through the week that was still spirited enough to have fun on the weekends.

If you're interested in tweaks, Marthy is the guy to look up. He has a lot of posts on here and still lurks from time to time. When he had his FZ6R, he swapped the cam with I believe the FZ6. He also developed the definitive Power Commander map for our bike. There's also an exhaust mod he once did.
— John

Hi. My names is James and I just received my fz6r Thursday as a Christmas present from my awesome wife. I have owned handfuls of bikes over the years (Honda shadows, Kawasaki Vulcans and er6n and dual sports), but haven’t actually owned a bike for the last couple of years. My wife covertly found and picked out a bike and color which looks awesome. So I am back at it with an 2016 fzr6 with 1400 miles on it.

My names Mike, from Ontario, Canada. I’m finally upgrading from my zzr250 and will be picking up my 2009 Yamaha Fz6r on Saturday . I joined here to get some ideas for mods and learning more about my new bike. I look forward to chatting with you all!
You must log in or register to reply here.
Share:
Facebook Twitter Reddit Pinterest Tumblr WhatsApp Email Link
Top